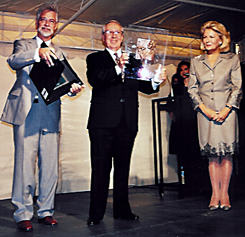 KulturPreis Europa (European Award for Cultural Achievement), which, for 11 years, has been awarded by the KulturForum Europa to individuals and institutions who have contributed to the development of human rights, law, democracy and intercultural dialogue, has this year been awarded to the Istanbul Foundation for Culture and Arts (IKSV), Turkey.

The Istanbul Foundation for Culture and Arts opened Turkey's doors to Europe and the world through the International Istanbul Festivals that they have organized for over 30 years in line with a philosophy that calls for "intercultural dialogue and tolerance".

Awarding ceremony
during opening of the International Istanbul Biennial 2003

This year's theme was 'Poetic Justice' and 85 artists from 42 countries are participating. The festival aimed to bring Istanbul's citizens closer to contemporary art. The festival was officially opened at the Antrepo location, and during the ceremony, the Europe Culture Forum honoured the IKSV with the 2003 Europe Culture Award. Europe Culture Forum Administrative Council Head Dieter Topp said that IKSV deserved the award because of its 30 year contribution to the creation of understanding, tolerance, and confidence between East and West, Islam and Christianity through the arts and culture.

Last year's award winner Elzbieta Penderecki, director of the Cracow-Beehoven-Easter-Festival (PL), handed over the 2003 Culture Award to Talat Halman of IKSV, creator of the Turkish Ministry of Culture in 1981 and first minister for cultural affaires of new democratic Turkish Government in 1981.