Piatra Neamț is located in the historical region of Moldova on the Bistritz, surrounded by the foothills of the Eastern Carpathians.

The city was founded at the end of the 14th century and, after the establishment of a royal court by Stefan cel Mare, Prince of Moldova (1433–1504), developed into a center of arts and crafts. The obvious place Târgu Neamț was the center of a German-speaking settler colony in the Middle Ages, hence the name: Neamț is an outdated Romanian term for “German”. 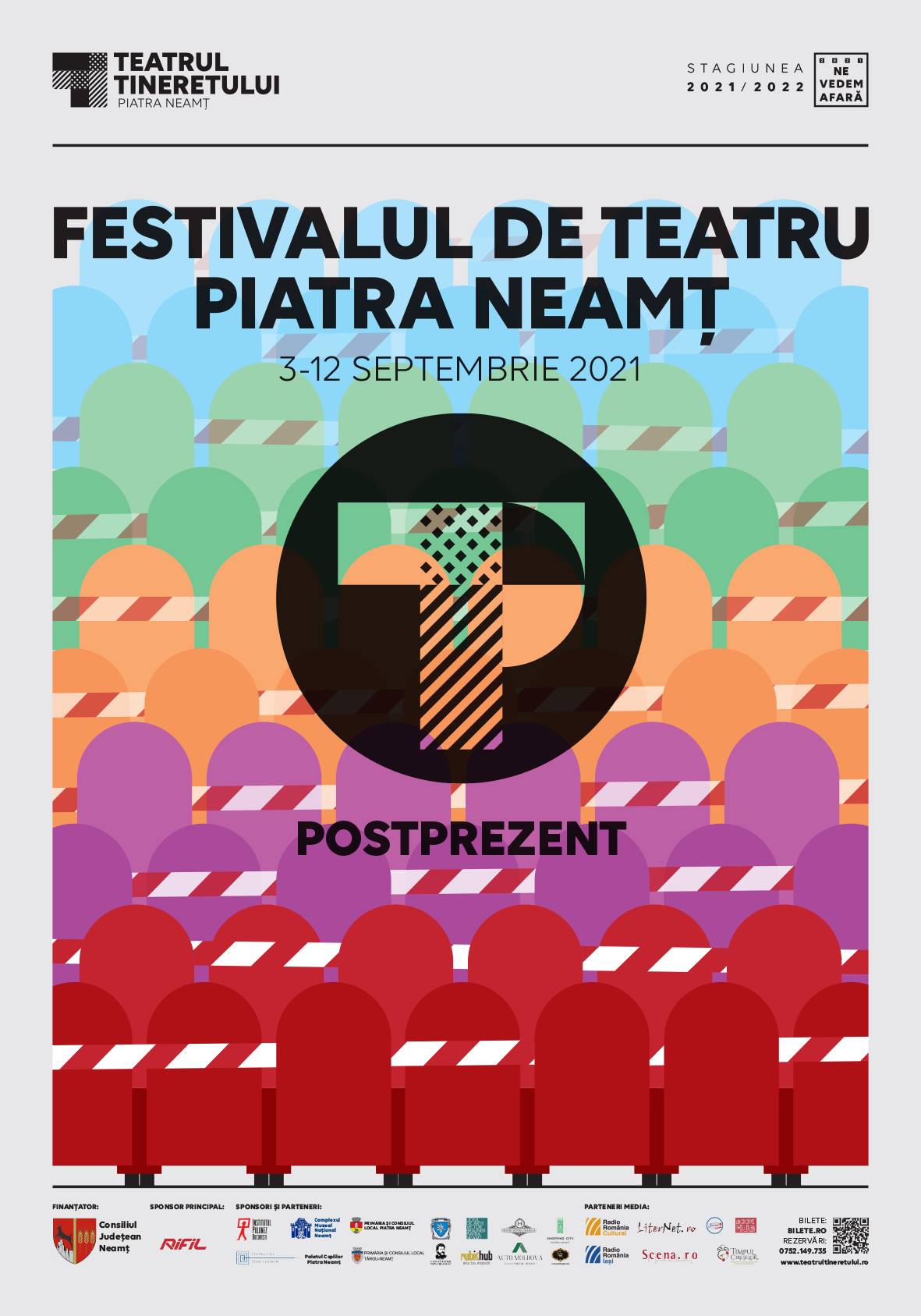 After the forced Corona break, Gianina Cărbunariu and her team from the "Theater of Youth" in the Romanian Piatra Neamț managed to once again resist adverse circumstances and impressively demonstrated in a pandemic-compliant, internationally enriched program how important and indispensable culture is.

The festival, which - like the theater since the management of Cărbunariu four years ago - has a mainly socio-cultural orientation, offered an impressively dense program with “POSTPREZENT - Something to declare & to share”. With this, the makers reaffirmed their confidence that art and culture can be a space for rational debate, especially in times of crisis, in which a common future can still be imagined.

In time of upheaval, art is particularly powerful, inspiring and intense.

"See you outside." This slogan was one of the basic criteria for the national section with productions for unconventional outdoor spaces. Concepts for indoor presentations were adapted and also performed outdoors.

The audience could rediscover urban spaces that were transformed into open-air stages: the facade and the side courtyards of the theater, the streets of the city, the courtyard of the Calistrat Hogaș Jewish memorial museum, the garden of the children's palace, the terrace of a leisure center, …

Diversity of programs and internationality

The corona pandemic posed a challenge in terms of travel planning for the groups involved. The festival organizers were all the more pleased that a large part of the productions could be realized as planned and that an international specialist audience and artists from met once more at the theater spectacle.

With daily lectures and workshops, this festival once again proved itself to be a place to reflect and discuss the pressing issues of the performing arts and the challenges of our time in general.

The opening already showed how these new "rooms" could be used excellently through skilful direction and technical commitment.

With “TO BE CONTINUED. On the mirror planet ”, Gianina Cărbunariu once again proved herself as an excellent playwrite. With a highly poetic fiction text, she mirrored the takeover of our planet by the elites of a universe that may be designed differently, but is damn similar to ours in terms of predominant negatives.

Sharply on the border between reality and fiction, the design set with futuristic costumes by Dorothee Curio (partly in the style of one of the last creations by Thai designer Pattrick Boyle, where shapes and colors play an important role and the face is no longer to bee seen) was visually impressive, acoustically the soundtrack (Alex Halka), the light by Cristian Niculescu, video design (Andrei Cozlav), graphic design (Levente Benedek) and finally the minimal choreography by Ferenc Sinkó made it a firework of multimedia perfection.

Due to mobility restrictions, the international section had to be reinvented. Artists were invited to create something especially for this festival. Those who otherwise create or present their works on an international level should come to Piatra Neamt with "hand luggage productions".

"It is important that the dialogue between artists and international structures continues, because it is clear that we are living in a moment when global responses matter," said Gianina Cărbunariu. This time the invitation was sent to artists from Belgium, the Czech Republic, Germany, Kosovo, Moldova and Poland. In contrast to the productions on international tours, in which the authors of the concept (directors, authors, choreographers) usually do not come on stage for interpretation, this time they performed in front of an audience.

Essay, statement, lecture, maquette productions or performative director's notes made up this section. According to the organizers, the title “Something to Declare” hid the certainty that there are human goods that are more valuable than those that have to be declared at customs around the world and that these goods gain exponentially in value when they are become common property the moment they are shared with others.

“In our community” - Bogdan Zamfir, who mostly lives and works in Belgium, described a project about localities around large and medium-sized cities, where the state has disengaged and the administration has left the citizens alone. The text dealt with everyday issues of an increasingly precarious middle class, such as the treatment of incurable diseases as part of the restructuring of a local hospital, job shortages, poverty and violence, which leads to a massive emigration of people who are looking for better prospects go.

Jeton Neziraj came from Kosovo to Piatra Neamt with a presentation of “One Flew Over the Kosovo Theater”:

Disappointment and despair after Kosovo's declaration of 2008 independence soon followed. The ruling political class was still made up of powerful commanders who had led the country's struggle for the liberation of Serbia. Criticism of this political class and of any negative development in the country, including corruption, was seen as an "attack on the state" and "its independence".  The playwrite could therefore easily be described as “anti-national” and “treacherous” to the homeland.

Neziraj is considered one of the most representative political authors of the new Balkans and received international recognition through performances and translations of his works. He was awarded the KulturPreisEuropa, which will be presented to him this November in Pristina.

Jakub Skrzywanek from Poland, whose work MEIN KAMPF (Powszechny Theatre Warsaw) offered an extremely provocative anti-fascist implementation of the controversial Hitler Book, presented the performance "MUSEUM OF THE ROMANIAN HOLOCAUST, a story that is better left unsaid again." “Crematory”, is the last part of his “Triptych on Violence”, a play to be performed in the Theater of Youth in Piatra Neamț.

“With Crematory we want to ask a question about something more universal - about the extermination machine and how people are ready to condemn the“ other ”,” said Skrzywanek.

Not to be forgotten were some exciting contributions by Michal Hába & Jindřich Čížek (Czech Republic), Nicoleta Esinencu and Doriana Talmazan (Republic of Moldova) and last but not least Mădălina Dan (Germany / Romania).

Among the Romanian productions, GEWALT IN DARABANI, a production from Cluj, was particularly impressive. Directed by Ionut Caras a testimony of intolerance, poverty and ignorance in form of interethnic conflicts between Jews and Romanians became evident, heralding future tragedies of the Holocaust already more than 100 years ago.

Pro Teatru Association, Zalău, impressed with GREEN FELLED, a production inspired by real events that was based on the effects of corruption in daily life: A woman in a village in Maramureș is looking for those responsible for the death of her husband, an employee of the local forest service who was killed trying to stop illegal timber shipments in 2019. (dir. Adina Lazăr)

This fact attracted attention in Germany: a TV production researched on location on the trail of the past and finally had to break off the recordings when they discovered the corrupt structures still prevalent; their security could still not be guaranteed ...

“Two thirds of the remaining primeval forests in Europe are in Romania. The country is something like the EU's green lung: But the protected areas have been illegally cleared for years. Because the wood business is booming. The wood thieves threaten the population and are increasingly unscrupulous against forest workers and environmental activists, "(mdr, 14.11.2019

The „Field of Struggle“ (unteatru, Bucharest) by Catinca  Drăgănescu followed the story of a young Asian man seeking a better life in Europe. This performance had a clear and remarkable text, and a very good directing (in some scenes more like a choreography), both by Catinca Drăgănescu. The production took the form of an urban fairy tale with an unfortunately bitter end.

The Field of Struggle is the third production in the Migration Trilogy. Luckily a few weeks ago I could see the first production “Rovegan”, about economic migration focussing on the story of poor Romanian women working in Italy (Badanta) and the effect this kind of dislocation has on their personal life and that of their families.

A cinematic essay should be mentioned, which appeared only recently: “Exit of the trains-IEȘIREA TRENURILOR DIN GARĂ” by Radu Jude and Adrian Cioflâncă.

A documentary essay, consisting of archive photos and documents from the first great massacre of the Jews in Romania, described the events in the city of Iași on June 29, 1941.

First a comprehensive “Encyclopedia of Death” with photos of people killed by the Romanian army and civilians, accompanied by voices reciting these documents. The second part was a montage of the remaining photographs of the actual massacre, mainly taken by German soldiers who were in the city

The Future of the Past, by Clemens Bechtel …
In this production of the Theater der Jugend, the actors invited us to a city tour of its own kind.

The year 2051. A couple returns to Piatra Neamț, an almost deserted city with only a few old people left. Even when people had been gone a long time, their stories stayed alive and revealed themselves to passers-by. The time of the first escape from the city, the "exodus of the Jews", the forerunner of the Holocaust, the period of communism, the first doubts about systems, the first foreign tourists, Jewish visitors to the old graves, as well as the "last of the Mohicans", this all spread the hope of a new multicultural coexistence in a distant future, especially when one had learned from the past.

An emotional encounter in Romania that culminated in the horror of the sentence from 1941: "The city is Jews free."

This anti-ethnic, anti-Semitic statement hit me like a punch in the stomach, given the current Polish activities of the PiS party to make the cities LGBT free. However, anyone who openly claims or even publishes such a thing within Poland is accused of damaging the reputation of the respective cities!!!

In an uncertain future, one certainty is sustained by the ghosts of the past who continue to roam history. Some of these ghosts are again very realistic and extremely lively.

The Future of the Past is a production for us, the people of the present, who try to understand what happened in order not only to prepare ourself for what is to come.

The present has caught up with the past in some areas, not only in Poland, but also in Romania, where similar activities are openly evident in day-to-day politics, where the church again plays an despicable inhumane role. - The rest of Europe is not spared either.

We don't just have to learn from the past to predict the future. Above all, we have to work on it so that at least some of Piatra Neamt's vision of the “last of the Mohicans” may become real.

My special thanks to the Theater der Jugend for the very special performance.

Future on the Past was a site-specific, wandering production whose script is inspired by historical documents and interviews by actors from the Theater of Youth with residents of the town of Piatra Neamț.

Thanks to the festival that and how the often and long suppressed topic about the Jews in Romania was approached in different ways. 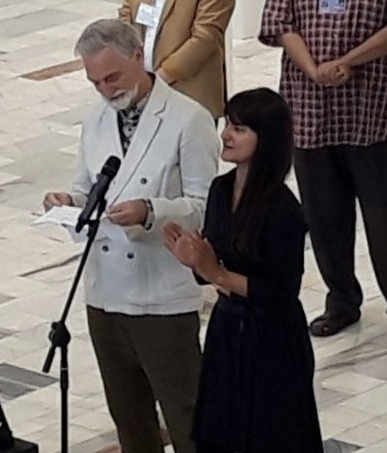