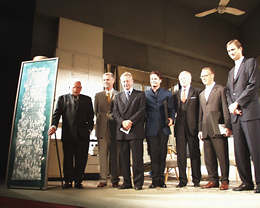 Dieter Topp, President of KulturForum Europa announced that the 2001 KulturPreis Europa had been awarded to Jeff Baron, for his play Visiting Mr. Green, (Besuch bei Mr. Green) in its production by Theater in der Josefstadt in Vienna. Baron is the first American and the first playwright to receive this prestigious award, which he shares with the director of the play, Franz Morak, and the two actors, Fritz Muliar and Michael Dangl.
KulturPreis Europa has been awarded annually since 1992 to someone from the arts, politics or economics in recognition of a contribution to European culture that promotes tolerance across national and societal borders. Previous winners have included Antonio Bassolino, the mayor of Naples; 3sat, the German communications satellite; Avraham Primor, Israeli Ambassador to Germany; and Dr. Pasqual Maragall, the mayor of Barcelona.
The prize had been awarded in Vienna after a special performance of Jeff Baron's play. Visiting Mr. Green was part of the repertory at Josefstadt, one of Vienna's leading theatres for the past two seasons, during which it also toured in Italy and Germany and was nationally broadcast on Austrian television. The Josefstadt production featured Austrian acting legend Fritz Muliar and young theatre star Michael Dangl, who are co-winners of the KulturPreis Europa 2001 with author Jeff Baron and director Franz Morak, formerly artistic director of Theater in der Josefstadt and currently Undersecretary of State of Austria.
Visiting Mr. Green is the first play of playwright Jeff Baron. It originally starred Eli Wallach, and ran for a year at New York's Union Square Theatre. Since then there have been more than 80 separate productions of Visiting Mr. Green, including an unusual number of translations and productions outside the U. S. for an American play. It has run for a year or more in Brazil, Holland, Germany and Greece, and has also had successful runs in South Africa, Israel, England, Switzerland, France and Australia. It will open soon in Argentina and Uruguay. Baron's second and third plays, Mother's Day and Mr. & Mrs. G, have both begun their lives in translation, outside of the U.S.
For more information, please contact Mary Harden at Harden-Curtis Associates in New York (212) 977-8502 [MaryHarden@aol.com], or Chris Rabe at the press office of KulturForum Europa in Cologne +49-2424-90 80 440 [rabe@kfe.de].