2014 European Culture Award to be handed over in Sofia 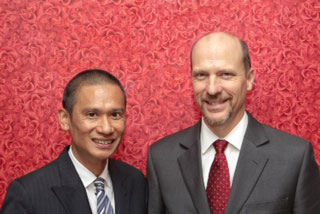 KulturForum Europa (KFE), located in Köln/Germany, has decided to award Deputy Chief of Mission at the Embassy of the United States of America in Sofia, Bulgaria, Mr. Bryan Dalton and his husband,  Anandaroopa, the European Tolerant Award in 2014. They both have been nominated for their lifework in building cultural bridges between the U.S., Europe and Asia; and especially, for their role as ambassadors to promote LGBT rights as human rights. Both are fine examples of cultural ambassadors, removing a historical cultural barrier by promoting mutual understanding, acceptance and tolerance.

For the last 20 years, KulturPreis Europa (European Award for Cultural Achievement) has been awarded by the KulturForum Europa to individuals and institutions, which have contributed to the development of human rights, law, democracy and intercultural dialogue. Founded in 1992 by the former German Minister of Foreign Affairs, Mr. Hans Dietrich Genscher, the KulturForum Europa is composed of leading politicians, scientists, artists and opinion leaders (www.kfe.de).

Romy Haag's success on the stage as the continuous and strong efforts of Bryan Dalton and husband Anandaroopa are also the story of a decades-long ongoing struggle against intolerance and prejudice, according to the unanimous opinion of Ulla Schmidt and Dieter Topp.

"Bryan and Anandaroopa both will join this esteemed group of awardees for their contribution to the development of human rights and intercultural dialogue, spanning many years and continents: from Vietnam, to Romania, to India, and now in Bulgaria. Their personal and professional support of LGBT individuals and/or organizations in these countries  -  even ahead of U.S. foreign policy in supporting LGBT minorities – proves their deep-rooted dedication to a world without prejudice and discrimination. Your support and development of LGBT groups in all these countries help to empower these peoples, not only of different sexual orientation and gender, but also of different caste, class, and ethnicities, with an enduring message of peace, friendship and understanding", explained KFE President Dieter Topp in a press bulletin to the winners. He will personally hand over the award in Sofia as a positive signal to the young EU country Bulgaria and a sign of support for some Bulgarian cities and their efforts concerning Cultural Capital of Europe.