Doug Wright's work is a continuous test, an acid test. Wright doesn't offer us easy, entertaining or ethereal, lyrical material. No, Wright places real outsiders at the center of things. People who are not just "something else", but people who follow their own, entirely personal conception of life with extreme consistency: people who are offensive. These are life sketches of people refurbished in a literary fashion who not only put their contemporaries to a hard test, but also us as readers or theater goers. Wright forces us to give up that comfortable distance and lets us in on fate and on words that provoke and should provoke.
How do we interact with the people Wright puts at the center of his works? How do we confront sketches of life that not only do not correspond to ours, but are perhaps diametrically opposed to them? Doug Wright puts us to the test. Contempt, ostracism, ignorance, tolerance or acceptance? As thinking and feeling people, many possibilities are open to us. If we follow the literally crazy careers Doug Wright displays, then we may learn to shed ignorance and ostracism. We get to know people who do not just seem strikingly different, but who have their own entirely personal, complex motives for their behavior, actions and lives. We learn that experiencing one's own self-determined life is a hard, often inhuman confrontation. It is a fight with an intolerant environment, but also a fight with one's self. 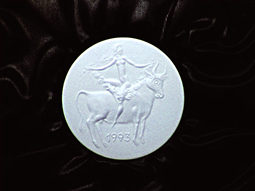 Charlotte of Mahlsdorf is a good example of this. She was a transvestite who survived two dictatorial regimes that diametrically rejected that way of life, that individualism in and of itself. Charlotte of Mahlsdorf was a complex character: a victim of German history and yet a child of German history in the same person; a woman and yet a man in the same person; simultaneously a confident individualist and a desperate opportunist --- Charlotte of Mahlsdorf embodies all of this in her controversial story.
In his play, "I Am My Own Wife", Doug Wright has accepted this person with love, with meticulousness, while at the same time never idealizing her. And so we are challenged to think for ourselves, to take the acid test. How do I personally handle tolerance and acceptance? How do we handle it with our outsiders? Do we merely tolerate them perhaps, or are we also willing to accept them with all of their inconsistency? These are questions that are right now today disturbing and challenging us more than ever. In this sense, "I Am My Own Wife" is certainly a thoroughly historical, but also a highly contemporary play.
If Doug Wright receives the medal of merit of the Culture Prize of Europe, then I see an acknowledgment in this of his confrontation with questions about tolerance and discrimination and simultaneously also an acknowledgement to literary art that doesn't downgrade us to comfortable culture consumers, but challenges us as citizens and people to do our own thinking.