"Ma Vie en Rose" ("My Life In Pink") is the story of Ludovic, a little girl born in a little boy's body. For him, nothing is more natural than to change his gender. As a hopeful and sensitive child, he truly believes that a miracle is going to happen. He will be a girl, no doubt about it, and he's in love with Jerome, his school mate, and son of his father's colleague. Initially a source of amusement, an outrage begins in their suburb when the two boys are discovered pretending to get married. The family begins to realize with horror that his desire to be a girl isn't just a little boy's fantasy. They try to make him change his mind, to no avail. The situation turns into a real-life drama of intense reactions from neighbors, friends, and teachers, resulting in a profoundly optimistic ending. "Ma Vie en Rose" was the first feature from Belgian director Alain Berliner. (Sony pictures Classics)

In today's world, popular culture has reflected a change in society where, as Berliner puts it, "the gender cards are being re-dealt." But even as boundaries blur, and more difference is becoming acceptable and even celebrated, particularly in popular culture, the pitfalls of sexual identity for the individual -- and for children in particular -- are still deep. 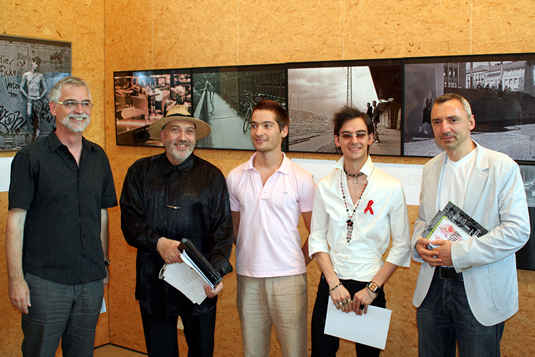 To focuss to the audience that there only little has changed and so much has to be changed in tolerance and acceptance of minorities French actor Georges Du Fresne had come to Gemany to open a photo-exhibition “GAY IN THE COUNTRYSIDE by turkish photographer Deniz Yücel” (www.kfe.de). at KulturForum Europa’s atelier house in near Cologne. Germany’s Vice chancellor Franz Müntefering sent a very special and personal greeting.

Next day Georges du Fresne got the European Tolerance Award. He had been awarded “as a 21 years old mediator between France, Belgium and Europe having brought and still bringing people together with this wonderful Alain Berliner film “Ma Vie en Rose” and its clear message of tolerance and acceptance, which is also evident in your personal thinking and behavior”, Dieter Topp, president of KulturForum Europa. “There is a lot of work to be done to fulfill the European law of equality by breaking down national frontiers on a cultural level, removing the historical cultural barriers by promoting understanding, tolerance and accepting, ‘Ma Vie en Rose’ was part of this work, 10 years ago and even 10 years later. There is a lot of work to be done.“

Georges du Fresne had been awarded in a very personal ceremony at the Cologne Five Star Hotel “Hotel im Wasserturm” an exclusiv and unique hotel of international luxury situated in former European’s ultralargest water tower. (www.hotel-im-wasserturm.de ) The Laureate had got especillay into the design of this building by famous French interior designer Andrée Putman. Besides playing act Du Fresne studies architecture at Strasbourg University.

Koscielny mentioned, “You are going to get the European Tolerance Award of the KulturForum Europa as a 21 years old mediator between France, Belgium and Europe having brought and still bringing people together with this wonderful Alain Berliner film ‘Ma Vie en Rose’ and its clear message of tolerance and acceptance, which is also evident in your personal thinking and behavior.”

Congratulation from US playwright Doug Wright and FLIFF

I was delighted to learn through president Dieter Topp of the Kulturforum Europa that you are the recipient of the Toleranz Prize for 2007. Last year, I was fortunate enough to receive the same honor for my play I AM MY OWN WIFE.

I am an enormous fan of your generous, humane and profoundly insightful film “My Life in Pink.” Seeing it in the cinema was a profoundly affirming experience; it presents a young, gay life in such a positive way. It was nuanced, funny and deeply felt…and I believe it had enormous social impact as well. I am pleased to see it acknowledged in such a lovely way.
In writing this brief note, I simply hope to send you all my congratulations and warm regards! And may have enjoy continued success in the future. All the best, Doug Wright, New York.

… I can’t believe ten years has passed so quickly since MA VIE EN ROSE won a unanimous Bravo from our jury, capturing The Best Film Award at our 17th Annual Fort Lauderdale International Film Festival. Equally amazing how that film has lived in the minds of our audiences. I field many a question (from what was the title of the film where the young boy….to, are you going to screen MA VIE EN ROSE again…to, what is that young man doing now) every year about that film.
Your performance was certainly he highlight of our 17th edition. I join my audience, Board of Directors and staff in congratulating you on your distinguished honor at KulturForum Europa.
Reel regards, Gregory von Hausch, FLIFF President & CEO (Fort Lauderdale International Film Festival)